The emblematic building of Saint-André Square can be discovered all year round thanks to the guided tours of the Grenoble-Alps Tourist Information Office.

A guided tour of the Ancien Palais du Parlement

Taken by storm during the European Heritage Days, the emblematic building of Saint-André Square (the “place du trib” for locals) can be discovered all year round thanks to the guided tours of the Grenoble-Alps Tourist Information Office. Guided tour only in french.Guided tour in english on july and august

Alongside Barbara, our tour guide, I will take you on the discovery of a place with an undreamt and rich heritage... the Ancien Palais du Parlement (in English: Old Parliament Palace)

If its outside is well-known – undoubtedly one of the most beautiful facades in town – the inside of the building on the other hand is less familiar. « This is rather normal, points out Barbara. Up until 2002, it was the Court House! You usually wouldn’t need to come here every day! »

It was built in the XIVth century to receive the Parlement du Dauphiné. Dissolved during the revolution to become a “simple” Court House, today the building welcomes the administration of the Isère Departmental Council.

Upon entering the Ancien Palais du Parlement, it is four centuries of the history of power and justice in the Dauphiné region that we will discover.

Once past the introduction, we follow the guide in a gallery decked with distinctive decorations: tailpieces. One of them, in particular, caught our eye... 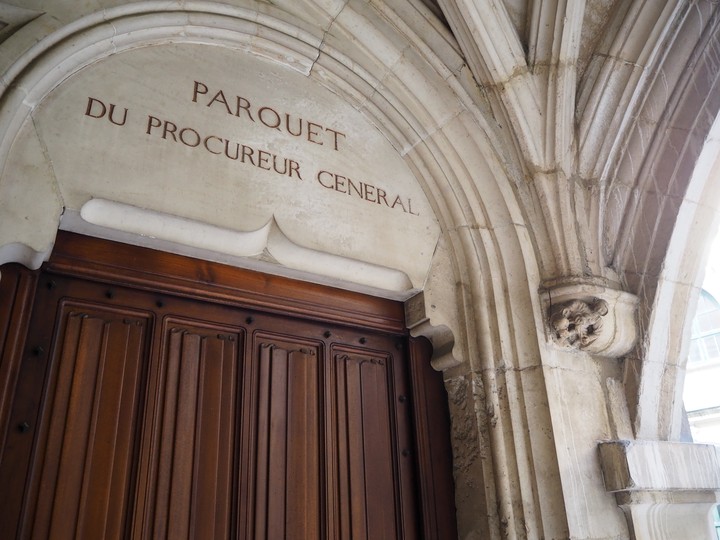 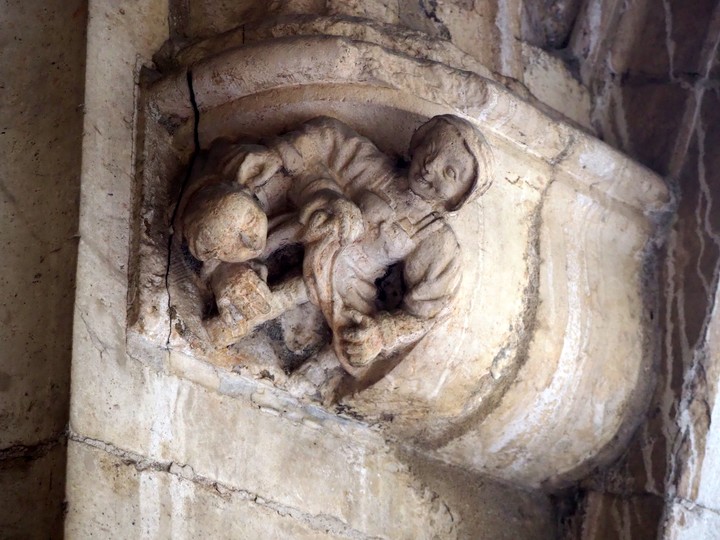 Pointing at the carved stone above our heads, our tour guide asks us what we see.

A visitor takes the plunge: « A woman and a man? »

« The man, explains our tour guide, holds the lady’s leg in one hand, and with the other, looks up her skirt! On her side, the woman holds down her skirt with one hand and pulls the man’s ear with the other! It’s a naughty scene. Take a look at the woman’s face, she is laughing! »

An unusual scene that you certainly do not expect to see in the Old Parliament Palace! Barbara tells us that « It is a craftsman’s brand. They are very critical of the institutions they are decorating. The woman seems to be punishing the man all the while she is laughing. It probably is a critique of the corrupt judicial system! »

In a second gallery, the “galerie des Dauphins”, Barbara tells us the story of the building linked to the Dauphiné Kingdom. As soon as construction started, it had to host the Parliament of the Dauphiné.

Successor of the Conseil Delphinal and the Institution of the Dauphiné Kingdom, the Council is promoted to the rank of Parliament by Louis XI in the XVth century. It then becomes the third Parliament in France, after Paris and Toulouse.

Its function is not something trivial; it is in charge of registering the King’s edicts. However, rare privilege, it has a “right of remonstrance”: it can refuse to register an edict if deemed inapplicable in the Dauphiné.

A right abolished by Louis XVI, which prompted the anger of the members of Parliament. « They were out in the street, in coffee shops and talking directly to the people – Didn’t Balzac say that coffeehouses are the Parliament of the people? They were able to convince them to prevent the King’s Army from shutting down the Parliament. The date is June 7th, 1788. This is the Journée des Tuileries. » An event that was considered to be the spark of the French Revolution.

The heart of the building: its old rooms and their decor.

We are starting the visit with the Civilian Court. The room is decorated with a delicate woodwork of a plant motif from the XVIth century, on which it was later added the coast of arms of the big cities of the Dauphiné (Orange, Vienne, Valence, Briançon…).

In the middle of this scenery, a splendid canopy – a sculpture in linden wood that was originally used for the crowning of the President of the Chamber of Accounts’ pulpit – takes center stage in front of the public. The large dark-blue hanging punctuates the decoration of this room. 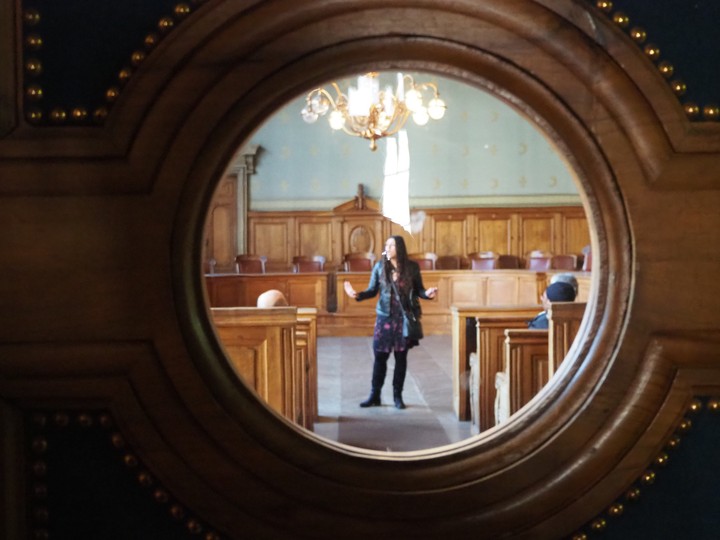 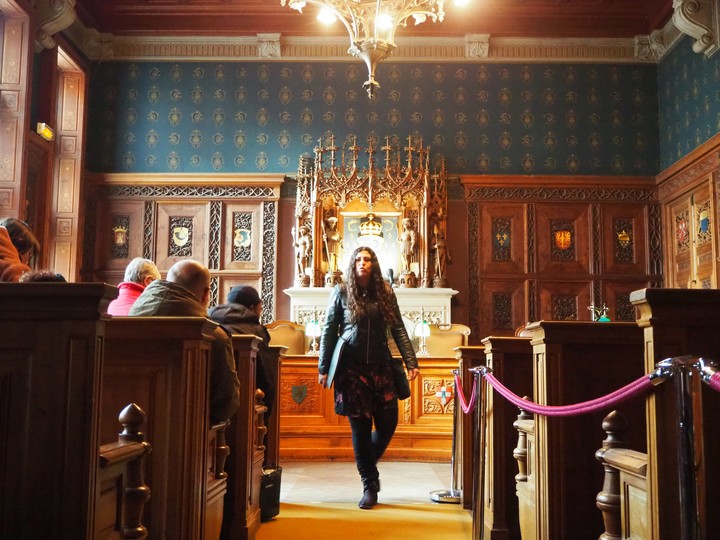 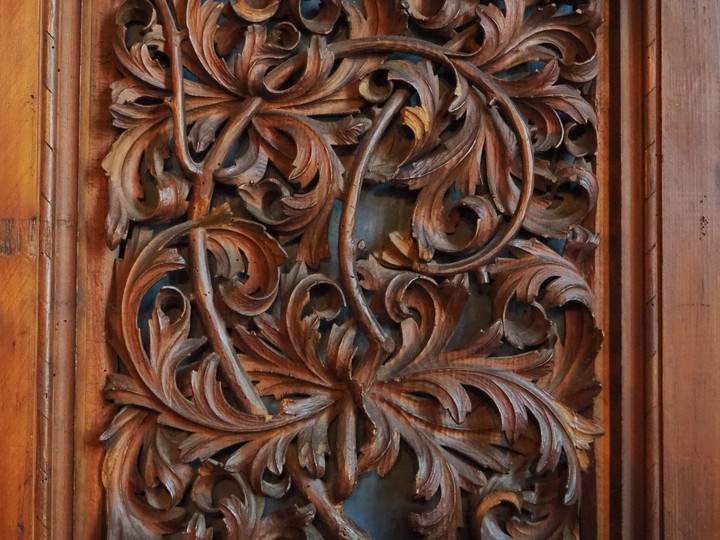 Another hanging holds all of our attention: the azure blue one with golden patterns of dolphins and fleur-de-lis from the Court of Appeal. It was made for the 1968 Olympic Games in Grenoble. It is, without a doubt, one of the most beautiful rooms in the Ancien Palais du Parlement.

We are having a fun time trying to find the symbols of justice in this scenery: the gladiator sword that judges and makes decisions, the torch which brings light to cases, and the sceptre, the hand of justice, held by the King. It reminds everyone that there is no higher authority. 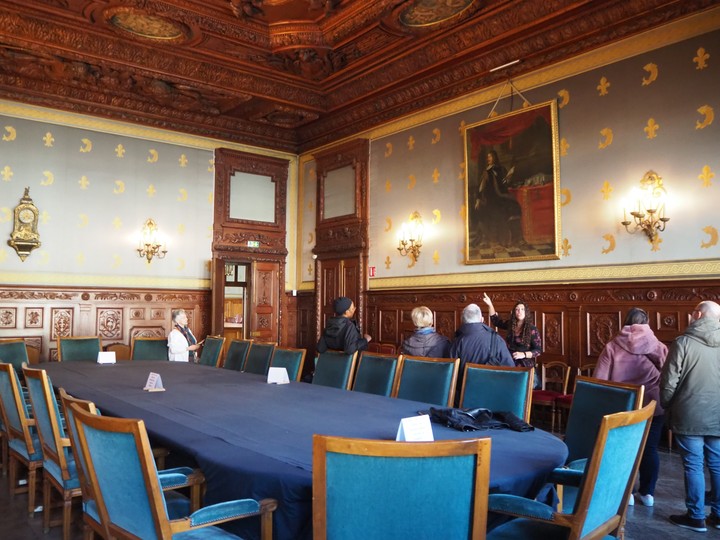 Related to the Court of Appeal by its style and its close proximity, we are now discovering the “blue room” – also known as the jury room. A large room richly decorated, that incorporates the azure blue hanging from the Court of Appeal and contains, in its centre, a large table and elegant seats. It is the true jewel of the Ancien Palais du Parlement.

In the middle of the ceiling, a chain of finely engraved “putti” (cherubs) circles a table of law. Between sunflowers and heads surrounded by halos of sunshine, the symbolism of Louis XIV is ever-present.

After passing by the apse of the old chapel, built approximately in the 1500s in a Flamboyant Gothic style, we take a new leap forward in time to discover the Criminal Court.

Barbara places us in a dock. « Here, you are not in the position of the jurors – like in an American TV show – but rather in that of the defendant. Behind you, you can notice a little door... it opens directly to the court cells! »

Major trials were held in this building:

François de Nobilibus, a Franciscan monk condemned to the stake for witchcraft after two years of procedure; Guy Elache, a Nazi collaborator enrolled in the SS to whom over 200 crimes were attributed...

The sentence is final

In this room, the place of the 6 jurors is chosen at random. They are not positioned on the sides of the court, but rather in the centre, next to the magistrates: the president and his two assessors. Their role is to help the jurors by conducting the discussion.

Luckily for us, we are acquitted by Barbara and can walk free from the dock!

We walk out of the Ancien Palais du Parlement with the feeling of having discovered a vast section of the Dauphiné’s history – with, in mind, the images of the woodwork, the hangings and the gildings that decorate this place whose rich history lives up to its glorious past.

If you also want to visit the Ancien Palais du Parlement during a guided tour with Barbara or another guide of the Tourist Information Centre, check out the list of guided tours.

You can also enjoy a virtual tour of the Ancien Palais du Parlement online.