When the mountain goes down to the city

When the mountain goes down to the city

Everything started when Bernard Mure-Ravaud met once Chris Moiroud. The first one is the best worker of France in his field and the world cheesemaker leader, the second one is found of cattle farming. They all together got a crazy idea: making cows from the mountain go downtown.

Behind this incredible project, there is a real motivation: the will to remember mountains surrounding the metropolis of Grenoble. It is also a place full of a wealthy economy, skills and flavors. In that sense, every piece of the puzzle gets together during this popular party: Cows, farmers, producers, traders and consumers. 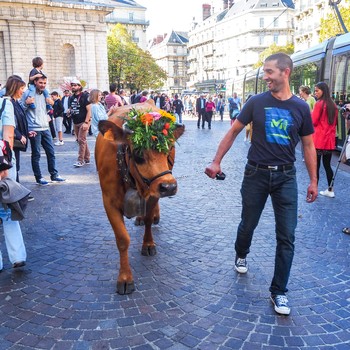 An event dedicated to local traditions and gastronomy

You may have understood that, « Descente des Alpages » gives pride of place to know-how and local traditions related to gastronomy. This is also a party for local products. Productions from the mountain plateau of Vercors, Chartreuse, Belledonne and Oisans get all invited to our table, creating happiness for food lovers. This is how, one could try out typical and local cheese such as « Tomme de brebis » from La Motte d'Aveillans,  « le carré du Trièves »,  « le Bleu du Vercors »,  tomme cheese from Chartreuse or Belledonne,  “le Saint-Marcellin”.There is also the possibility to discover local food such as sausages like “ le Murçon”, or les Diots served with “Polenta”.

In order to magnify products, master chefs and best French workers share skills with Bernard Mure-Ravaud. With different presentations, workshops, meals and challenges, they all make us feel and taste the real French gastronomy.

And nothing could hide it, Strasbourg street, the central place of the event is full of people! 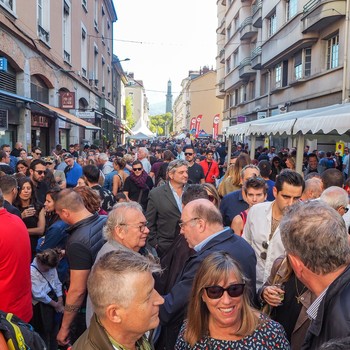 By definition, this is a popular event to share with friends. This is both a place to meet your closest friends or food lovers. Tables are full of people, and wine bottles are getting successive, as well as cheese and oyster trays. Storekeepers are part of the party and show their expertise. They put on a great spread.

The parade and the farm of the city center: the happiness of the youngest

Different categories of cows (Tarines, Abondances, Herens, and Villardes) have left their alpine pasture. Before going back to the stable for winter time, they come to meet the people of Grenoble. Dressed with the most gorgeous bells, decorated with flourished crowns, they all wander in the city. You are getting back to your childhood years, while seeing cows naturally going between tram’s ways and the biggest avenues. You’re getting into the mood with ringing, lowing and the brass band singing old popular tunes from our land: “étoiles des neiges, mon Coeur amoureux…”. One does not feel anymore inside the city but in the heart of the Chartreuse, on the highest pick of Belledonne, or else in a lost place in the Vercors mountain range… 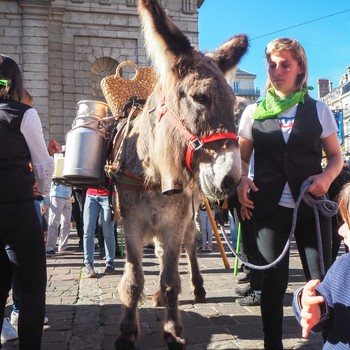 Curious people draw a crowd close to the beasts that did not seem to be too much disturbed. The process of the cows even goes with tastings. I personally had the opportunity to taste “asses’ milk”. A specific milk with a strong taste of rum.

One can experience this rural atmosphere in Strasbourg Street, for children great delight. Indeed, numerous farm animals are part of the party. Don’t be surprised to find a mischievous sheep that freely wander in streets looking for hay. Some Rabbits, ducks, goats, a veal and even some ponies. A rapture for the youngest city-dweller.

To end up the day, you could not leave the day without having tried out milked cows in pastures. It will give you the opportunity to drink hot milk, directly milked from the teat. Unbelievable experiences and unusual sensations, inside the city center.

We’re letting you some music and images in order for you to get an overview of the best moments of this alpine. This is now time to say goodbye to the herd and see you next year!

All photos and videos credits: Loïs Perrin – OTGAM
Thank you to « Descente des Alpages » for their welcoming.